The contemporary retrospective of a living artist is, depending on their influence and will, an occasion for contemplating the motivation and trajectory of a mature body of work.  It’s also an opportunity to return to familiar works, examine first-hand some seen only through reproductions, and discover those previously unknown. 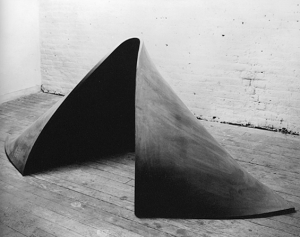 Richard Serra’s retrospective at MoMA is all of that and a good deal more.  While there are, unfortunately, no drawings on view, the exhibition is supplemented by Serra’s films, articles, lectures, discussions, and numerous interviews [see below] with the artist in which Serra offers his own articulate and determined view of the work, from the early process pieces created collaboratively with Philip Glass (whom Serra is quick to acknowledge), to the prop pieces, the installations, and culminating in the elegant and sublime works of folded steel, three of which were created specifically for the current exhibition.

Serra argues that there is a clear and consistent development from the cut, lifted, and folded materials of the late 1960’s to the recent torqued toruses and ellipses.  We can argue about how convincing those relations seem to us, and we should given that out of the hundreds of works illustrated in the exhibition catalog, only twenty-seven are included in the show.

The works on view have been carefully chosen to reinforce very particular lines of development from To Lift of 1967 to Band of 2006, and from Belts, 1966-67 to Sequence, 2006.  For the visitor walking through the galleries, the exclusion of the numerous scattered, torn, splashed, and draped pieces from the ’60s, which recall the work of Eva Hesse, Barry LeVa, Robert Smithson, and Robert Morris, sets conveniently to one side the chaos of the late ’60s and early ’70s as artists looked for a way out of what appeared to be the limiting constraints of a minimalist orthodoxy.  And while these additional subplots complicate the story by dragging us back into the pessimism and disorder of those formative years, what you can’t help but appreciate in this careful and numerically limited array of sculptural objects is the extraordinary grace and power of Serra’s destination.

I’ve seen many of these dramatic and monumental steel works over the years.  But I’ve never been so impressed, walking through them and following the towering and descending flow of lines and shapes, by the way they realize the beauty of pure mathematics on a scale that is nearly overwhelming.  This grand conjunction and contrast of math and mass is a tribute to the strength of Serra’s effort, intelligence, and vision.  Whatever one may think of the man and the controversies surrounding him, the compelling quality of the work he is currently producing has to be acknowledged.

Image courtesy of The New York Times, 20 May 07