I saw Occupation: Dreamland yesterday afternoon at Cinema Village.  OD is a non-fiction film by Ian Olds and Garrett Scott which documents the activities of the young Army recruits of the 82nd Airborne’s Alpha Company, 1/505, 2nd Platoon stationed in Fallujah during the winter of 2004.  The film has gotten a fair amount of attention, all of it well-deserved. (More links below.) 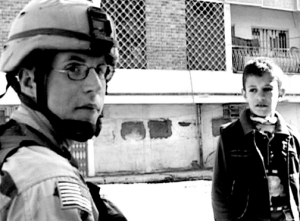 The film takes a non-judgmental look at the attitudes of the men (no women in this platoon) who find themselves caught up in “the fog of war”, not quite knowing why they’re there, what if any rationale lies behind their orders, and what can possibly be accomplished either in Fallujah or Iraq generally.  All they have to go on is that they’re to “maintain security” and establish good relations with the Iraqis.  But even the clarity of this modest goal is undermined as a company commander instructs the soldiers, ”Back yourself up and think about what, exactly, we’re securing. We’re securing ourselves. So what, exactly, are we protecting? I don’t know.”

Listening to the soldiers talk about why they enlisted and how they feel about their tour of duty in Iraq, you can sense the confusion of young, working class guys who either weren’t interested in or ready for college, were uncertain about their futures, and saw the Army as something to do “in the meantime”.  Many of them assumed it would be a relatively easy and risk-free way to get an education.  If nothing else, it would jumpstart the next phase of their lives.  In most cases they had not thought through the implications of military service or what their tour of duty in the Army might bring.  In short, they were definitely not prepared for this.

One wonders how well they’ll be prepared to return to “normal” life when they return from the war.  The 82nd had been stationed in Afganistan prior to their being sent to Fallujah.  Many had enlisted for only two years — the Army was desperately trying to keep them in for four.

After the credits rolled, there were eight of us left in the small theater.  A young man in a white t-shirt and blue jeans stood up and announced, “I’m in the 82nd division, if you have any questions, maybe I can answer them.”  He made no attempt to convince us of the value of the war.  Rather, we talked about his own uncertainties and what it was like to be in Afganistan and Iraq.  He was clearly unhappy about the situation there, said he wish we’d never gone in, and admitted that morale among the soldiers was very low.  He was not pleased with the heavy-handed tactics of the Marines who relieved the 82nd later that year. “I can’t see any way we’ll be out of there for another five or six years”, he said.  “The only hope is to turn the other cheek and not shoot back when fired upon. You have to just keep trying to help the people over there.”

I wondered why he made the unsolicited offer to speak with us. Was it out of a sense of duty, to help us understand what’s going on there from the soldier’s point of view? Or was it a way of making sense of his own experience?  Some of both, I expect.

What we did not hear was reference to the recent Human Rights Watch report on the routine beating and mistreatment of prisoners by members of the 82nd division prior to April 2004.

Three U.S. army personnel—two sergeants and a captain—describe routine, severe beatings of prisoners and other cruel and inhumane treatment…. The soldiers also described abuses they witnessed or participated in at another base in Iraq and during earlier deployments in Afghanistan.

According to the soldiers’ accounts, U.S. personnel abused detainees as part of the military interrogation process or merely to “relieve stress.” In numerous cases, they said that abuse was specifically ordered by Military Intelligence personnel before interrogations, and that superior officers within and outside of Military Intelligence knew about the widespread abuse. The accounts show that abuses resulted from civilian and military failures of leadership and confusion about interrogation standards and the application of the Geneva Conventions. They contradict claims by the Bush administration that detainee abuses by U.S. forces abroad have been infrequent, exceptional and unrelated to policy. [Human Rights Watch]